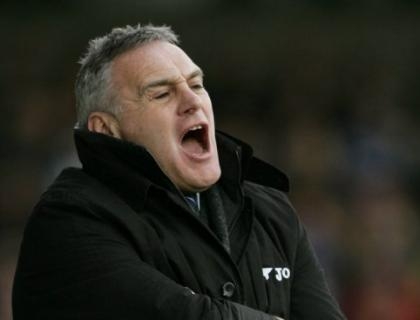 Simon Cox's fifth goal of the season was enough to steer Nottingham Forest into the top six of the Sky Bet Championship as they secured a 1-0 win over managerless Sheffield Wednesday at Hillsborough.


Cox struck in the 48th minute, tapping home a ball across the six-yard box from Greg Halford, who spent the 2008-09 season on loan across the city with Sheffield United at Bramall Lane.


While victory guided Billy Davies' team into the play-off places, the Owls are firmly rooted in a relegation battle with Saturday's performance full of endeavour but short on end product.


It completed a busy week for Owls fans with former manager Dave Jones' departure followed by the very real possibility of him being replaced by ex-Sheffield United boss Neil Warnock.


Not only did the prospect of Warnock in S6 divide the Wednesday fans, it also split United supporters who questioned his motivation and previous die-hard commitment to the S2 club.


Chairman Milan Mandaric had revealed Warnock - who guided the Blades for eight years - was on a five-man shortlist but on Friday he ruled himself out of contention, citing his affinity to Wednesday's city rivals.


As well as the off-field intrigue, the Owls claimed their second win of the season when they beat leaders Leicester on Tuesday thanks to a double from Connor Wickham although they remained second bottom of the table, above Barnsley on goal difference.


Visitors Forest started the match in eighth, just three points off the play-offs despite having only won once in seven matches.


Forest had the first attack of note with Andy Reid its fulcrum with his attempt at a threaded ball through going for a corner of which nothing came.


Atdhe Nuhiu headed narrowly over for Wednesday when he should have at least tested the keeper and Wickham fired directly at Karl Darlow after running in on goal.


Cox fired over from distance for Forest and then Wednesday missed a golden chance when Darlow miscontrolled a backpass, ultimately playing the ball to Nuhiu.


However, the Owls striker's touch was poor, allowing the keeper to smother at his feet.


Damian Martinez comfortably gathered from Cox and there was little of quality or invention from either side in the opening half hour.


Jacques Maghoma was upended but, with his Owls team-mate lying prone and boos ringing out around Hillsborough, Liam Palmer fizzed a ball across goal which eluded any Wednesday boot.


Cox then found himself in acres of space as Wednesday appealed for offside but he drilled his angled shot over the top right-hand corner of the goal when he had Reid and Djamal Abdoun in support.


Forest, though, went ahead two minutes into the second half when Cox had the simple task of tapping home Halford's sliderule pass across the six-yard box.


Billy Davies' side then had what appeared to be a good shout for a penalty dismissed when Cox went down under Martinez's attention in front of goal.


Jose Semedo hit the ball across goal and well wide for the Owls while Wickham made space under close attention but fired a weak shot straight at Darlow.


Reda Johnson scooped the ball wide, seemingly surprised when the ball came to him and although the hosts were certainly not giving up there was such little end product it was hard to see where an equaliser could come from.


Indeed, Reda Johnson appeared fortunate not to concede a penalty in the final minutes when Matt Derbyshire went down in the area.


Palmer fired high and wide from distance as the match came to a finish with Wednesday showing effort but creating little.